However, the smell of twilight is still fresh in my mind.

The wind-blown grass straws are greener than anywhere else, topped with lilac seed-heads matching the rose red sky above the horizon and the very odd, almost unnoticeable, appearance of the moon on the light blue evening sky—a shadow struggling for its survival, just like the memory of a daydream. And then it’s gone.

That night, it was as if the dusk lasted longer than anything my mind could recollect. But, somehow this hour always has awakened a particular kind of feeling in my body, a very strong sense of restlessness in the stomach.

Well now, let’s drop all this very romantic imagery and get back to the basics… perhaps, or do you recognize any of these feelings?

RK                 I had a dream, I had forgotten where I had parked my car, and I don't even have a car. In this dream I floated up high looking down on the vast parking lot and myself. I saw the cars all at once, rows and rows of beautifully coloured reflective cars. This reflective finish is very seductive, but I guess it became mainstream and has now lost its appeal from overexposure. Now more and more cars have a matt finish, as though the colour is vacuumed in silent space. Then I was in my car and I woke up.

JMC               I am super nervous. It’s as if both the moon and the sun are about to rise at the same time (the other night I saw the moon set and the sun rise at the same time.) Well, somewhere in between I’m the person looking at this—it almost feels like salvation. On the other hand, I cannot ignore gravity. The white and red spotted dress hanging on the shoulders, being pulled towards the ground: that must be by gravity. This is somewhat an image of the sunset—or that is what the dress reminds me about. The scenario is: people drinking cocktails by the poolside, probably somewhere sweet, a hot place, just to squeeze in a bit of glamour. I notice that from one dress’ fringes there’s dripping pool water. Outside of the house a couple of cars are parked. Yours too.

RK                  Frank Sinatra's ballad "Polka Dots and Moonbeams" playing through the radio waves, whilst looking at the glaring reflection in Seurat's paintings, dot for dot, freckle for freckle filling an image. Impressions of reflection, dots shining at you or for you, isolated or together soldiering on. Did I tell you I am painting dots or is it freckles, where is the line? When do the dots become a freckle or a smudge, when does a pattern emerge, how many dots or freckles, two or more, observing and experiencing themselves with you.

JMC               It’s all about the nose. That is freckles on the nose. Oh dear, suddenly I’m one year back. His hair was bleached (cheesy), and I have a faint memory of his nose looking a bit like Bruce Nauman’s nose, but not in profile. I just realized that. It’s strange with these recollections, they seem to fade away every single time. Did you mentioned overexposure? My point is that he had some freckles on the nose and smelled of suntanned skin. It’s like the dot behind the eyelids after staring into the sun for a couple of seconds. The afterimage.

RK                  Wikipedia states  "Only very bright stimuli such as the sun produce positive afterimages, which will usually trigger a negative afterimage quickly via the adaptation process." What stands out to me here are the words, positive and negative, afterimages and adaptation… Well let's not forget the source Wikipedia! What is true? Who is the source?  Vision is not an unreliable source. What comes first, the projection of what you want to see or the interpretation of what you saw? The image or the afterimage, positive or negative. Is there an order in which we adapt, which comes first or second, are they not both the same?

Tell me about your casts…

JMC               Positive time or negative time. There is a crack in everything, right? But slowly it will get blurry again. Hardcore. A repetition of the repetition, a flashback manifested in the sun a built-in loss of recall, and I need to surrender to something–well, at least to the material.

Sometimes I lose my grip around my eye, a bastard-like moment sets in, and in the next blink of an eye, the outstanding account between the eye and the motive has vanished from the world again. But this is not a matter of a drastic distortion of the vision or of the world in general—most of it appears as it otherwise normally does. A snapshot arises after having stared into the sun for a few seconds. The seconds are elongated; they turn up on the other side of the eyelids. Hereafter, the sun flickers as an afterimage on the retina, a kind of vision’s non-sight—a portal for a necessity of the uncertain. Let that which comes come: the network of thoughts, of shadows, of visions, of grief and joy; the tragedy, an invisible maze, which hovers over the head and thunders down every now and then with electrical voltage in the shell, creating a small crack—the pressure alleviates and the rain comes. It’s like how when the rain falls on the ground, when everything becomes softened, that the contours rise—the moment when the relief stands out, a cast of the liberated electrons: the memories, the daydreams, the flickering, the impression, an impression of the sunrise.

RK                  Everything is on reverse, the overexposure to information and the supposed interpretation of things and events leaves no room. Everything is viewed in reverse, the meaning or double meaning as one sees the sun. It's a funny, yet profound reality, that one can no longer look at the sunset without a hint of irony. We know the feelings, the exposure, the cliché. We are given it all at once, so much so, it all goes into reverse.

Rachel Whiteread spoke of her piece  "Ghost" as mummifying the air. So she was not aiming to depict the negative space, or the inverse, but trying to capture the air, the intangible, in a monumental sculpture. The mummy is the reverse in physical form, a body left behind without life, a concrete symbol for the afterlife or is it afterimage.

In the Hip-Hop scene I remember sometime in the 90’s that it was briefly cool to have your jeans on back to front, or would that be reverse?

JMC               We inhale and we exhale the air. I quite enjoy the thought that we are keepers of air, inch by inch, everywhere and nowhere, inside and outside of our bodies. Both refugees and negotiators. The sun rises and the sun sets, and hurries back to where it rises. Like walking between everything and nothing (I owe this one Borges.) Or swimming around in a basin of infinite time.

JMC               If the sun is everything, then the sun ought to be democracy and art as well. We are left with the sun, not the other way around. Democracy jumps and joggles from position to position, mind-to-mind, body-to-body, ashes-to-ashes. Art too. Some years back I travelled to Damascus. I never managed to take any photographs, but still my head is loaded with images from the old city, the souk, the view from the rooftop balcony at the hotel we stayed in, the dessert landscape, the sunset, the air—condition cooled airport, the scents, everything but irony. Or to put this another way, to rekindle a thought that was important at an earlier moment in time, which faded away, but suddenly loomed up again like the bullet in Russian roulette. This peculiar experience of reliving past experiences, as if you were not really prepared for that this was supposed to happen, or even that they, the past and the present experiences, existed in some kind of dialogue. But the experience is there: it sits in the body, like a parasite’s recollection.

RK                  I believe it is the other way around, the sun is left with us, and it is King. The stories we tell about ourselves are ways in which we get to know ourselves. Gradually as each word traces the steps we took, we get to know or remember who we were at the time and paradoxically it immediately reveals whom we are now in relation to then. The moment we saw that sunset whilst walking or swimming in an almost drowned Venice, how much or nothing has changed since, but how retracing that journey in images or words becomes the revelation for now, judged in panic or pride. Democracy infiltrates the willing, and closes the fearful. I read a very interesting study about nature and its power over consciousness. Patients were either in rooms with a view, seeing the sea and sunlight, or a room with no window but a poster of the sunset or a poster of an artwork. The patients with the real view recovered with best results, the patients with the least success were the ones staying in rooms with posters of an artwork. So a reproduction of a sunset can get you recover better than a Monet pond scene.

JMC               Will the poet ever reach salvation without either/or? My pour heart, I then must declare my bad condition—for how can I ever understand without doubt? I spend my days buying flowers. The flowers will be arranged accordingly to the shadow, in relation to the pattern zigzagging across the wall.

RK                  Doubt is acceptance of the double dead-end we are within. Carl Andre said, "Art excludes the unnecessary". Would that be what a poet does? Does the word poet mean something different today, is it maybe a limiting term?

Right there in front of me while walking absentmindedly down the street that day (my usual dusk-time walk) I saw in the corner of my eyes a car driving in my direction and by some reason my attention was drawn toward the car. When I was about to take a proper look at it, perhaps at the colour of it or something like that, another car (a van) was in the picture and blocking the view of the passing car. Instinctively I turned my head the other way and noticing the reflection of the first car in the big window.

What I saw was not the car. I saw the world. In front of this mirror I saw the world—I could see everything as a reflection of the world, out of sync and untrue. At that moment, in front of the mirror it was quite clear to me that what was in from of me was the very fragile border between one side and the other side; the parallel sides of the passage. This joyful moment of recognizing an image I have had in my mind for such a long time. However, I am not sure what will happen now. Further and even longer down the passage I guess. Perhaps towards the dining place, then around the corner, wherever that might be, catch a glimpse of new neon lights—horizontal and vertical, diagonal and crooked. This passage, this mirror, this daydream. The necessity of the uncertain. Always. 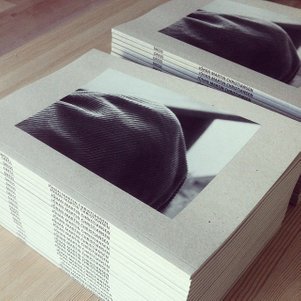