A dual sensation of sublime beauty and simultaneous dissolution and ruin hits spectators the instant they step into the Lonely Hearts exhibition by Hansina Iversen and Jóhan Martin Christiansen. This show was largely thought out and created on location in the exhibition hall Listahøllin at the MEST Shipyard in Tórshavn.

The location matters. This was where the bold Autumn Exhibition Group in 2005 opened a show in the shipyard’s old steel and aluminium store. It has been thirteen years since that vernissage, but the raw show rooms remain the same, and since that first opening they have framed many an exciting exhibition, both by the Autumn Exhibition Group and solo artists. Hansina Iversen and Jóhan Martin Christiansen chose not to repair the old storeroom preserving its timeworn state. This means that the Listahøllin and its history are subsumed in the display, which is also shaped by materials found on site. It gives the exhibition a searching feel, turning the show itself into a laboratory for artistic experimentation.

Listahøllin stands in the middle of a bustling industrial zone. It is not every day you have any business in these surroundings: walking in the shadows of hulking vessels on the slipways, where hissing sparks fly from the tools of the iron-masked welders. The sheer size of the ships is dizzying. They tower over you like islands silhouetted against the cityscape generating an undertow that draws you towards them. Much like the way Hansina Iversen felt when she for the first time visited New York’s MoMA and experienced works by Color Field painters and abstract expressionists like Mark Rothko and Barnett Newman. The sheer scale of some of the canvases was such that you could just sink into them. This experience of art scaled-up has had a major impact on Hansina Iversen, and she has also worked to a big scale in her own paintings, including the mural she created on location for her solo exhibition at the National Gallery of the Faroe Islands, Anything is a Mirror in 2014.

Materially the shipyard environment is very interesting with its constant activity and continuous transformation of materials. Tough steel plied by fire to the point of melting and liquefying, like the plaster in Jóhan Martin Christiansen’s works, which sets only to be broken up again and arranged into artwork. The blue, red and green containers outside Listahøllin are reminiscent of over-sized blue Lego boxes brimming with curious items in assorted materials simply waiting to be rearranged in all sorts of combinations and installations. Perhaps these surroundings impress their shapes in the minds of spectators, lingering on the retina, bleeding into the exhibition experience for a moment. And maybe that is why we catch glimpses of ship silhouettes and melted steel in Hansina Iversen’s painted shapes, while Jóhan Martin Christiansen’s large-scale piece taking up the centre of the exhibition room floor suddenly seems to evoke Trolaradekkið (The Trawler Deck) by Ingálvur av Reyni and Théodore Géricault’s The Raft of the Medusa.

Though both starting point and style clearly differ markedly in these two works, the contemporary Faroese painting from 2003 and the French romantic painting from 1859, they do have something in common. In terms of subject matter both canvases deal with some form of maritime experience. However, I think that the mental association through Jóhan Martin Christiansen’s work owes in particular to a certain atmosphere of doom, which stems from the darkness, the dramatic structure and the inflamed horizon in both paintings. The atmosphere of doom in Jóhan Martin Christiansen’s work is not conjured by a painted sunset or any figurative narrative; it is a sculpture after all without any actual horizon. But the oblong dynamic structure with bent iron mesh and smashed plaster formations somehow evokes the outline of a ship. The doom in this work, however, is material and stems from the structure and Jóhan Martin Christiansen’s creative process, which ‘destroys’, breaks and deforms plaster casts and iron mesh into works of art. The result is simultaneously eerie, dystopian and poetic.

The exhibition Lonely Hearts can be defined as a site-specific installation with murals, sculptures and plaster casts. There are countless glaring differences between the work of these two artists in form, material and colouring. While Jóhan Martin is known for using only a few hues in his off-white and iron-coloured plaster and textile works, painter Hansina Iversen is a colourist to the hilt who uses pure spectral colours, grey tones, pastels and everything in between. Having said that, in this exhibition both artists seem to be approaching each other a little. Hansina moves towards sculptural and relief-like lines, while there are traces of colour in some of Jóhan Martin’s works. This knits the show together as a whole.

Although Hansina Iversen has been very true to her own artistic, non-figurative starting point, she continues to develop her imagery. And even though her style is very recognisable and distinct, there is always something new to take in when she exhibits. In the large murals of the Lonely Hearts exhibition several shapes have sharp edges, which are a reminder of her inspiration in the 1990s, the Hard Edge Painting. At the same time, these works are a natural continuation of the layering structure with overlapping shapes that look a little like papercuts. After exploring and expanding her image universe over many years, it is as if the artist has shifted her focus to the very surface of the painting in order to examine the challenges and possibilities such a strictly confined area may have to offer.

From the correspondence between Hansina Iversen and Jóhan Martin Christiansen, it is clear that Hansina has her doubts about the non-figurative concept and whether her work can be characterised as non-figurative, she remarks a little sardonically that her art is, in fact, filled with figures. And it is true that her paintings teem with shapes, rounded as ever, but with an image universe that appears increasingly intricate with formations in several layers threatening to burst out of the image.

For an artist like Hansina Iversen, it can seem like quite a drastic change to work in the frame of an entire room, rather than painting on one canvas at a time. Yet it is not so different from her scenography. She produced the scenography for plays such as Sár á Sál (Soul Wound), The Witches and Ómegd (Powerless).

Perhaps we can view the exhibition hall Listahøllin as both an image space and a dramatic space, where Hansina Iversen’s murals and collages are a form of scenography around Jóhan Martin Christiansen’s pieces, which are arranged through the room to a rhythm, like a dynamic and open choreography.

In the aforementioned correspondence, the artist writes about lemons in one extract. He writes: “Lately I have been thinking about lemons (!) The yellow is like a hook to hang something on. The yellow is magnetic; simultaneously drawing in and driving away.” It is interesting how Jóhan Martin Christiansen links a colour to a physical characteristic, because it certainly applies to Hansina’s work, where it feels as if the colours are pushing each other into or out of the paintings, depending on where you rest your eyes.

Hansina Iversen regularly uses lemon and cadmium yellow, and one of Jóhan Martin Christiansen’s works in the Lonely Hearts exhibition features several actual lemons. It is a highly dynamic sculpture, a lying shape made from steel wire mesh lined with plaster. Sprawling across the floor it resembles an open clam, an oyster or a great trap poised to snap shut at any moment, like a hungry mouth, were it not for a slender stick jammed in the middle. The work does not depict anything specific, but with the lemons it conjures up associations with memento mori in still lifes and poetry from the 17th century, subtle reminders in the form of fruits, soap bubbles, burnt down candles, empty glasses etc. that lament our beautiful and joyous, but also doomed and ephemeral earthly existence.

Danish baroque hymn composer Thomas Kingo does the same when he in a hymn about sorrow and joy philosophises about how “earthly gold like skin is dust beautiful to behold, heaven alone bliss can uphold”.

Kingo’s hymns are entirely unique precisely because of this constant dialectic; the poet views the human life from the perspective of eternity. However, if it were all about pining for the pearly gates and the poetic ‘I’ lived with his head in the clouds patiently awaiting eternity, well, then Kingo would probably never have become or remained as well known and popular a choice in church hymnals. He is interesting precisely because he knows and loves all of earth’s glories and has the capacity to distil and discipline them in his poems. If it were all just about the afterlife, then there would be no reason to cultivate beauty in this life as much as Kingo does in his many hymns. Take, for example, the magnificent opening lines of his Easter hymn: “Like the golden sun ascending, / Breaking through the gloom of night, / On the earth his glory spending/ So that darkness takes to flight,”1. Like the golden sun, the lemons shine yellow against the grey plaster in Jóhan Martin’s gaping piece. It is exquisite and at the same time brutal, with a stick that dramatically and diagonally pierces the work, the way we also see it in dynamic classical sculptures of Eros, the Greek god of love. In Greek mythology Eros symbolises love and an erotic allure, which can be as destructive and unhappy, as it can be vitalizing and blissful. During the Hellenistic period and for the Romans, Eros was a dewy-faced teen or a boy with a bow and arrow, who pierced human hearts and made them fall in love, whether they wanted to or not.

We all know that hearts, particularly the lonely ones, are unguarded against attacks with love’s arrow. The exhibition title Lonely Hearts is interesting with many anatomical and cultural associations. In addition to the, evidently, vital role of the heart in sustaining life in the human body, it is also a reference to fluffy pop music with songs like Sgt. Pepper’s Lonely Hearts Club Band by The Beatles and Owner of a Lonely Heart by Yes. The references to pop are a little tongue-in-cheek, but there is also something more serious, intense and existential at play in the title with suggestions of a heartfelt and beautiful artistic friendship between the two creators, Hansina Iversen and Jóhan Martin Christiansen, who together have created Lonely Hearts.

From the Lonely Hearts calagogue, published in connection with the exhibition with same title,  March 2018 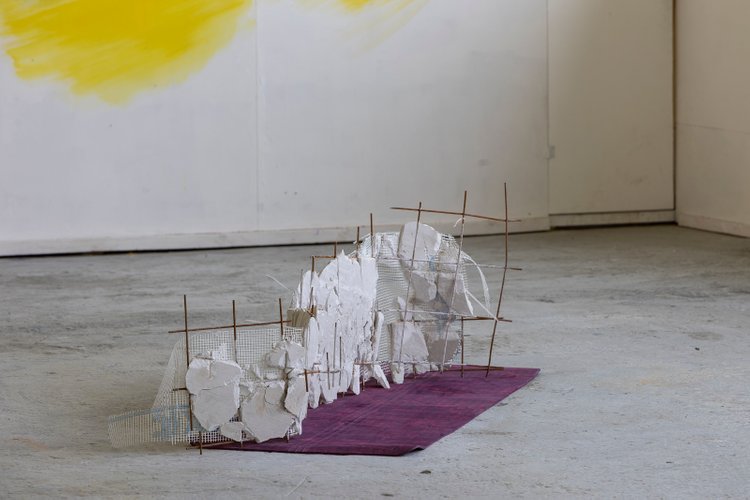