RESONANCE – SOME INTRODUCTORY MUSINGS ON MEMORY, TIME, PERCEPTION AND THE CRUMBS OF A MADELEINE CAKE

We all know the feeling. A sudden flash of sound, scent or an object opens up a wormhole in a split second, propelling us into the labyrinthine store of experience and temporalities hidden inside our memories. It might feel almost too tedious to mention, but the French author Marcel Proust offered such a sublime description of this phenomenon in his magnum opus, In Search of Lost Time1, that it still merits mention here: even now, 100 years after the novel was written, it continues to vividly conjure up the sense of sitting alongside the author by the bedside in his aunt’s bedroom, eating madeleine cakes dipped in linden tea. Within the field of visual arts too, artists have long been interested in the potential inherent in al l the attendant meanings and narratives we associate, at a personal and collective level, with ordinary things and materials. This interest took on a new dimension with the arrival of the avantgarde movements of the early 20th century which not only depicted such objects, but began to incorporate them as physical components that expanded the vocabulary of art. Ever since, these have become a fixture of modern art history – albeit with various inf lections and intentions. The shock caused by Duchamp’s urinal has long since subsided, however the effect of letting something familiar act as associative triggers in art has proven as vivid and thought-provoking now as then. For in the best cases, the wormhole does not just open up onto the safe, upholstered bedroom of an old aunt, but takes you directly to the engine room of meaning-making.

A similar interest in creating new meaning out of what is already charged with significance is also the crux of the group exhibition Resonans (‘Resonance’). The word chosen for the title literally refers to the vibrations that arise when an external impact sets a material into motion. Unlike its close cousin, the echo, which describes how sound is emitted and returned almost unchanged, the heart of the phenomenon of resonance is a process of relational exchange. If two or more units are brought into synchronous vibration, they can reinforce, but also ultimately negate each other, just as the distinctive traits of particular materials add their own timbre to the mix, creating new ones as they meet and merge. Quite simply, the title offers a metaphorical reference to the artistic processes and strategies involved in the exhibition – processes that employ devices and methods such as objet trouvé, collage, assemblage and montage in their endeavour to pave the way for new approaches to and outlooks on the world, and whose elements – however arbitrary they may seem at first – must necessarily enter into some kind of resonance in order not to fall silent or fall apart.

Similarly, a group show is always a fragmented narrative of shifts, displacements, overlaps and digressions; of materialities and positions. Under the auspices of Resonans, this narrative is inhabited by the following artists: Thomas Bang (b. 1938), Jóhan Martin Christiansen (b. 1987), Pernille Egeskov (b. 1970), Jonas Kasper Jensen (b. 1982), Johanne Skovbo Lasgaard (b. 1985), Jytte Rex (b. 1942), Tove Storch (b. 1981) and Christian Vind (b. 1969). As will be clear from the list of artists, one of the intentions behind this exhibition was to bring together artists across different generations, groupings and media in order to pave the way for new exchanges of meaning to resonate between the works.

In the exhibition, all eight artists take their starting point in existing materials that acts as a sounding board in their works. In this context, the artists have been given free rein, applying their own interpretation to the idea of existing materials. Their choices range from found everyday objects, Egyptian mummy portraits and a particular scale of tones to cut-outs of the spaces separating the lines of a newspaper article, industrial prefabricated objects and an archive of drawings. Despite their disparities, the works are al l interconnected by a shared focus on issues pertaining to memory, time and perception. The concept of memory is often popularly associated with a nostalgic yearning for something that once was, but as is pointed out by psychology professor Dorthe Berntsen, memory is as essential for our ability to navigate and make sense of the complexities of existence as our five senses: ‘Without memory, reality shrinks to the here and now, the immediate present, making you unable to navigate in time and space’.2 The ability to remember is fundamentally important; we need it to be able to perceive, achieve knowledge of or indeed imagine anything at all, just as we need it to be able to regularly revise and correct our individual and collective positions and perspectives on the past, present and future. In that sense the seeds of the future reside in the past, but the only certainty is that everything is forever changing and that our access to the world always rests on one particular interpretation out of many potential ones. In the works on display here, these fundamental preconditions reveal themselves as multivalent breaks in the syntax of the familiar and in their accentuation of the unfinished, the explorative and the veiled, of decay and fragility; not as a tragic end, but as a productive springboard for new constructions and new ways of thinking. Rather than focusing on specific memories or insights, the exhibition places emphasis on those structures and processes that underpin memory, perception, knowledge and, hence, meaning making. It provides no unambiguous messages, no clear-cut answers. Instead, it offers a space for reflection that can accommodate the viewer’s own associations, store of memories and independent positions.

The open-ended nature of the works entails a range of inviting gestures that may sometimes seem awkward, shy, or deliberately provocative, but as in all other aspects of life, our encounter with art requires us to invest something of ourselves, to choose to risk something. Building on this point, the title Resonans also incorporates a reference to the German sociologist Hartmut Rosa, who introduces the concept of resonance as an analytical lens and ‘solution’ to the alienating effects that have followed in the wake of our present times of acceleration with their mantras of optimisation, utility and constant skill-raising.3 As Rosa states, the objective of such thinking is

not to stop the overall development of the world, but to create scope for developing our own voices and for being touched by the voices of others. The road to achieving this involves a keener sensibility to the world. We must engage with the world instead of trying to control it. Doing so is not necessarily without friction. To paraphrase Rosa, ‘without moments of alienation, resistance or opposition, all resonance will slowly peter out’.4 Rosa himself points to how art can provide such resistance by being simultaneously open and impenetrable. Like all exhibitions, this one reflects an implicit hope that some resonance – if not total, at least glimpses of it – will arise between work and viewer. In a time of echo chambers, deluges of information and misinformation and, importantly, political posturing tending towards focusing on the instrumentalised utility of art, Resonans is intended as a nod to art’s ability to encourage a more independent and responsive approach to the world, to the always imperfect interaction between sensing and thinking, to the unknown in the familiar, and to the magic in the crumbs of a madeleine cake. Ever since art was unshackled from crown and church, it has stopped serving any other function than simply that of being art; it neither should nor could provide fully finished solutions to anything. What it can do, however, is to create a much-needed space for practicing one’s ability to surrender to the inexplicable, to approach, fail and approach again, to bridge the gaps between habitual differentiations and categories to engage with the world anew. As the German philosopher Martin Heidegger put it, art is an enigma, and the task is not to solve it, but to see it.5

With their tactile relationship to their surroundings, Jóhan Martin Christiansen’s works remind us that our access to the world is first and foremost mediated through our senses; that everything we recall and know is rooted in the material world. Even the most unremarkable materials are marked by time, by actions, by the elements; imprints that the artist accentuates in various ways, including their poetic whispering in abstract works that focus on the human body, memory and decay while incorporating performative traits. All of these tracks and traces come together in the work De første dage. Vi falder (‘The First Days. We Fall’), in which a broken-up plane of plaster is only just held up by reinforcement mesh and a single bamboo pole brutally inserted into the structure. At a formal level, the work explores matters such as balance and centres of gravity, and the clear traces left behind by the creative process also point back to the artist himself and the physical act of creation. Browbeaten and ruinous in appearance, the piece evokes associations to a kneeling figure or a smashed fragment of architecture. Close study of the partially painted surface reveals casts taken from the grain of a fraying plank of wood, randomly made cuts and blurred newspaper cuttings which, with their iconic symbols of Western culture, appear like hazy reflections of past greatness; like portents of or relics from the demise of the evening land. In this way the work opens itself up to a reading based in a critique of civilisation, linked by the biblical allusions of the title to the myths of both Genesis and the Fall.

From the Resonance catalogue, published in connection with the exhibition with same titlel, September 2018 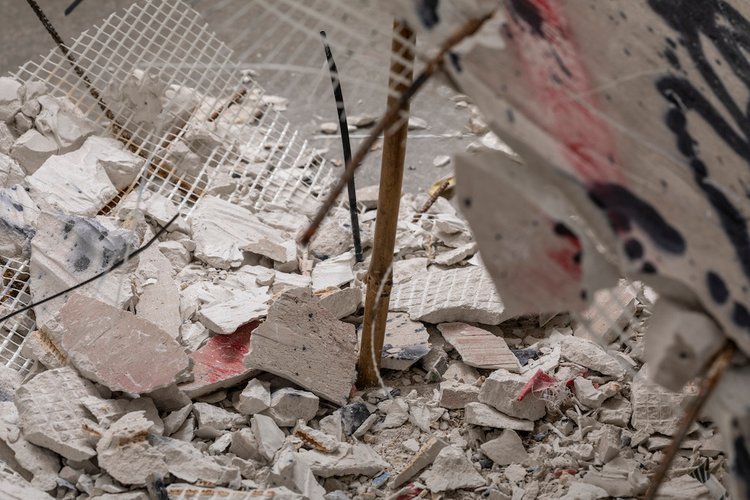 1 In Search of Lost Time comprises

seven volumes, published in the

5 Martin Heidegger, Off the Beaten

by Julian Young and Kenneth